Can Jon Huntsman win the 2012 GOP presidential nomination? The New York Times‘ Nate Silver thinks Huntsman has an uphill battle given that many base Republicans see the former Utah governor as being “unacceptable.”

The Unacceptability Index reflects an average of these six figures among Republicans who have formulated an opinion about the candidate. 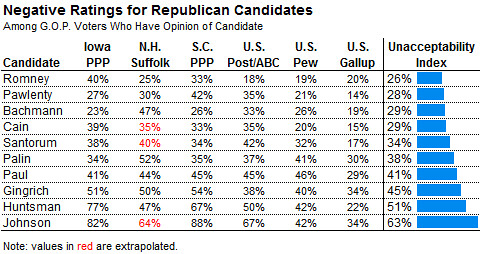 About half of the views Republicans expressed about Mr. Huntsman were negative, producing an Unacceptably Index of 51 percent.

Mr. Huntsman is considerably less well-known than most of his rivals — between 60 and 70 percent of Republicans remain unfamiliar with him — so there’s a chance that these figures will improve as he introduces himself to more voters. He does have several strengths, including support within Republican establishment circles, an intriguing resume, and considerable charisma.

It doesn’t seem likely to me, however, that the poor initial impressions are a fluke. Instead, they almost certainly reflect the fact that Mr. Huntsman has taken a number of positions that are bound to be unacceptable to large swaths of the Republican electorate. Among them are expressing support for Barack Obama’s 2009 stimulus package, endorsing an individual mandate for health insurance, and securing Utah’s participation in a regional cap-and-trade program. Mr. Hunstman also holds a moderate position on gay marriage, having endorsed civil unions for same-sex couples. And he served as President Obama’s ambassador to China.

In short, numbers like these should argue strongly against placing Mr. Huntsman in the top tier of candidates along with those like Mr. Romney and Mr. Pawlenty. Rather, I suspect that his odds of winning the nomination are no better than some of the “insurgent” candidates like Ms. Bachmann, or candidates like Rick Perry and Paul Ryan who are unlikely to enter the race but would be more acceptable to the Republican base if they did.

Read more from Nate Silver at The New York Times

<!-- Cached page generated by WP-Super-Cache on 2